Mitternachts Waltz in Genshin Impact 2.3: How to use ? 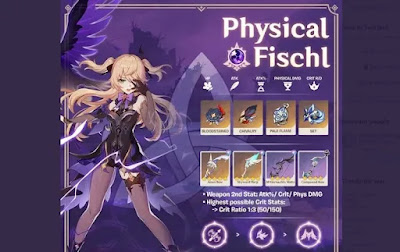 Genshin Impact's newest weapon banner will feature the Mitternachts Waltz, a unique 4-star bow that's styled after Fischl. This weapon has an interesting passive ability that makes it useful for certain characters, though it's held back somewhat by its substat.

Taking advantage of this bow may be challenging for most players, but some may want to give it a try. Choosing the right character to utilize it is important, and players can get a list of its best wielders here, along with a description of the weapon's stats and passive.
Read More: Genshine Impact Itto Banner Release Date


The Mitternachts Waltz is a 4-star bow that can only be acquired from Genshin Impact's featured weapon banner. This bow looks perfect alongside Mondstadt's resident seer into the darkness, Fischl. It seems like this bow was created for Fischl's main DPS role, as it provides some interesting passive bonuses while also boosting Physical DMG.

Unfortunately, there aren't many characters in the game right now who can properly utilize this bow's full potential, but there may be a physical focused archer down the line.

Here is the stats of the Mitternachts Waltz weapon in Genshin Impact 2.3.

This sounds amazing, and it is, but it's hard to maintain these bonuses without a quick-hitting Elemental Skill.

Who is the best Character for Mitternachts Waltz bow ?

However, as things progressed, Fischl became valued more for her Electro damage, and the build fell out of favor. Still, it can be a powerful one if built correctly.

Not many other Genshin Impact characters can take advantage of this weapon's Physical DMG Bonus, but players can try to use it on units like Childe, as he can deal a decent amount of damage with his Normal Attacks. Unfortunately for fans of this weapon, a designated user has still not arrived, but one may be revealed in a later update.